Abengoa, which has built the plant and is in charge of its operation and maintenance, has 51% of the project. Industrial Development Corporation (IDC), one of the largest development finance institutions in South Africa, owns 29% and Khi Community Trust controls the remaining 20%. 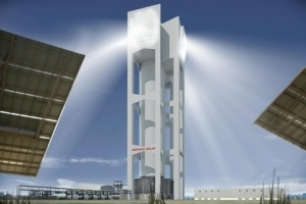 Abengoa has put into commercial operation the first solar thermal tower technology from South Africa, Khi Solar One, with an installed capacity of 50 megawatts (MW).

Abengoa, which has built the plant and is in charge of its operation and maintenance, has 51% of the project. Industrial Development Corporation (IDC), one of the largest development finance institutions in South Africa, owns 29% and Khi Community Trust controls the remaining 20%. This project, a public-private initiative, was awarded by the South African Department of Energy and will supply clean and reliable electricity to Eskom, the South African electricity company, under a 20-year power purchase agreement.

KHI Solar One is a plant of solar-thermal technology Tower of superheated steam, the first with these features, with an installed capacity of 50 MW, which allows to supply clean energy to 45,000 homes. The plant has a storage system that allows to produce maximum power for approximately two hours without sun, representing a contribution of stability key to electricity production in the region. In addition, Khi Solar One incorporates an innovative system of dry cooling, as well as other significant improvements result from the important work done by Abengoa in the development of solar thermal technology.

This project offers numerous environmental and socio-economic benefits. Operation reduces emissions of 183,000 tons of CO2 per year, providing the energy needed to supply the growing South African electricity demand in a sustainable manner.

Also, the plant has encouraged local socio-economic development with the participation of a large number of local businesses. Similarly, the inclusion of members of the local community in the project through Khi Community Trust shareholders guarantee continuity in the time of the generation of a positive impact.

Also in South Africa, Abengoa, IDC and KaXu Community Trust have completed the first year of operation of the plant 100 MW, KaXu Solar One, trough the first plant thermal power plant in the country. With this plant, Abengoa, IDC, PIC and KaXu Community Trust is currently developing another floor trough and power of 100 MW, Xina Solar One, in this case with a storage system that allows to operate the plant for five hours.

These projects demonstrate the commitment of Abengoa and IDC with the development of renewable energy in South Africa as part of the Government strategy to obtain up to 17,800 MW of renewable energy by 2030, reducing dependence on oil and natural gas.