The high density of U.S. energy storage system will increase the efficiency of the towers

Southern Research projects put into service in October of 2017 a demonstration of 1 MWh (th) energy storage plant using thermochemical high temperature technology, following a recent injection of funds from the Department of energy of the United States.

The promoter based in Alabama was one of the 14 research groups to which was awarded in September, a sum of 32 million dollars (USD) from the SunShot of the U.S. Department of energy plan. UU. The federal program funds projects aimed at solving problems of CSP subsystems in order to reduce the average cost of electricity.

Southern Research received an allocation of 2 million dollars (USD) for a demonstration of their storage technology of thermochemical energy (TCES, according to its acronym in English) for a supercritical CO2 cycle, which provides a refined and reinforced custom-made, calcium oxide is subject to a reaction of reversible carbonation in a reactor with parallel plate heat exchanger.

The system has been designed for Tower stations and represents a significant advance in terms of energy density with respect to current methods, Santosh Gangwal, principal investigator of the project of SR, told CSP Today.

What happens is a very clean simple reaction, not complicating side reactions. The secret lies in the composition of the material, which allows to keep the structure intact; "not only calcium but also some other components that constitute the complete formulation and facilitate the frame remains intact", Gangwal said.

"Since our system density is increased, the result is much smaller than the of molten salts: around one-sixth of the volume of storage for the same amount of energy", said.

Turbines currently used in the traditional plants and CSP installations used a technology that is fully developed, but with efficiencies of system limited by maximum temperatures of about 480 ° Celsius.

SR has already developed their TCES in laboratory scale in previous phases, with temperatures up to 750 degrees Celsius.

By using a supercritical CO2 cycle, the heat-to-electricity conversion efficiency is increased to around 50%, about 10% more than in conventional steam cycles, according to Gangwal.

The system uses an absorbent material derived from a low-cost raw, and therefore SR researchers rely on your system to decrease the cost of energy storage to between 13 and 15 USD/kWh (th), fulfilling the objective of 15 USD/kWh (th) by 2020 set by the SunShot of the U.S. Department of energy initiative. 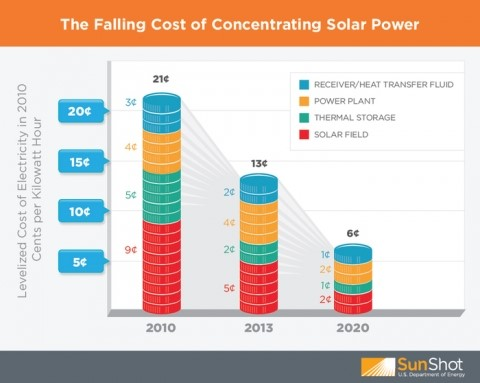 CSP leading companies with projects in the U.S. are developing components accessories able to manage systems of high temperatures.

What happens is that different parts of a process of supercritical CO2, which are at different stages, are currently and all are doomed to its show", noted Tim Hansen, principal co-investigator of the Mr project

The storage component is one of the parties; the heat exchangers are another; the heat transfer fluid is another; the power block is another. "Our main focus of interest is in all to pass to subsequent phases and finally integrate them in what will be the powerhouse of the future."

SR project is based on the technology of combustion Brayton cycle and other mechanical systems s-CO2 honored at awards 2012 for supercritical CO2 of the SunShot initiative projects, and perform a demonstration of the research work carried out under the round ELEMENTS focused on thermochemical storage 2014.

The development of this system will offer growth opportunities to many companies, including manufacturers of absorbent material or processing equipment of fluids (HTF, according to its acronym in English) heat transfer and providers of high pressure pumps and heat exchangers.

Towards a commercial scale

In October 2016, SR increase its scale to produce more than one ton of absorbent material identical to the experimental demonstration.

We are working with manufacturers and suppliers of absorbent material to be in a situation of increasing the scale of manufacturing with particular properties that we need ", said Bill Grieco, Vice President of energy and environment on Mr

An important part of the technological and commercial development is to ensure that manufacturers and suppliers to promote the development of a support infrastructure to enable the achievement of the adjacent parts of the process".

SR projects built and put into service 1 MWh (th) storage system from here to October 2017, at the time trading arrangements for systems of trade show with capacity of 10 to 50 MW.

Commercial-scale deployment is scheduled for 2021, with promoters of towers such as Abengoa, SolarReserve and Masdar as candidates for a possible cooperation, through a strategic partnership or a license, as explained by Mr.

With a well-planned demonstration project, seems that the commercial launch could anticipate,"explained Fred Redell, CEO of Abengoa in the United States.

"If this new technology is successful, not only will be cheaper than the current [of solar thermal energy storage], but which could allow that the CSP work with more efficient supercritical CO2 energy cycles, resulting in all likelihood greater reductions in the cost."

Grieco said the research team to put attention on the development of a proper trade route for this technology.

Much of the work for the coming years is to establish a means of proper marketing. The federal Government has taken steps much more solid in recent cycles of funding to ensure that these projects are more likely to achieve commercial success", he noted.